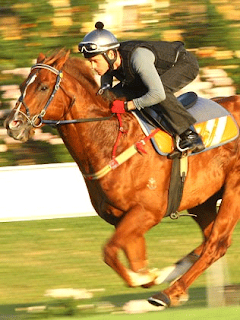 Starspangledbanner works along in his preparation for the British races

JON LEES and ALASTAIR DOWN both report for the Racing Post on Saturday July 10 2010 as follows:

JON LEES “Murtagh ‘gobsmacked’ after picking up costly ban.
“Johnny Murtagh left Newmarket feeling ‘sick as a pig’ after picking up a six-day ban that rules him out of the King George vi and Queen Elizabeth Stakes at Ascot and the first two days of Glorious Goodwood, which includes the BGC Sussex Stakes.

“The rider said that much of the gloss had been taken off his Darley July Cup victory on STARSPANGLEDBANNER after he was found guilty of careless riding when he took his mount across to the far rail early on. ........

“As soon as the stalls opened in yesterday’s (09.07.2010) July Cup, Johnny Murtagh, drawn 11 of 14, set sale for the far rail and it was a race clinching manoeuvre that thoroughly brassed off the stewards, who handed the winning jockey a six day ban for careless riding. The head – on camera view clearly showed that STARSPANGLEDBANNER carried PRIME DEFENDER right across the field , interfering with KINGSGATE NATIVE and SERIOUS ATTITUDE with the Tail-end Charley of the domino effect being SHOWCASING. In the ruck, MARCHAND D’OR and BALTHAZAAR’S GIFT were also sufferers. So by the time STARSPANGLEDBANNER had charged 200 yards down the July course he had interfered with or tightened up at least six, of his 14 rivals. Which is a fair old strike-rate.

“The stewards took the view that Murtagh was not sufficiently clear of his pursuers to carry out such a move and they were right, as he had found his new home on the rail by the time they had gone a furlong. There are two views of Murtagh’s tactics – it was either a cynical strategy or a skilled piece of race riding in a race of huge commercial importance.

“Whichever view you take, Murtagh would have known it was a high- risk ploy as far as the stewards were concerned and, while he may be irritated by the ban, he can’t be surprised by it...."

J Margaret Clarke reporting for Turfcall, Alastair Down quite rightly points out that the July Cup is a race of huge commercial importance. Which indeed it is.

Turfcall highlights further key facts that no one else appears to have even taken into consideration? The prize to the winner of this race is £227,080 (Two hundred and twenty seven thousand pounds, plus) What happens to all the other competitors and their connections in this race, who were effectively stopped, by the manouver attempted by Murtagh ? Compensation?
Whereas the prize to the horse who finishes second is £86,050 (Eighty six thousand pounds, plus)
So between the first and second prize money for the Darley July Cup 2010 here, there is a difference of £141,030 (One hundred and forty one thousand pounds, plus. A big financial difference between the winning horse and the second horse.

The only fair outcome to this incident IF all things had been taken properly into consideration at the time, should be that the horse who finished second “EQUIANO partnered by MICHAEL HILLS” trainer B W HILLS for J H ACHESON was the honest winner. Due to the fact that MICHAEL HILLS and EQUIANO travelled a clean run throughout this race from the start to the line, without causing any interference to effectively stop any of the other competitors.


That whilst STARSPANGLEDBANNER responded to Johnny Murtagh’s request it was a badly timed request, a request that caused considerable interference to at least 6 of the other competitors. This type of riding is not acceptable, and can never be acceptable. If Murtagh’s timing had been accurate, he may well have pulled his move off OK, without causing any interference to any of the other competitors.

From the time the gates of the starting stalls open, throughout the race to the winning post, all interference however caused at any point counts against the perpetrator, and can never be acceptable, due to the fact that it is a form of cheating.

There is £141, 030 difference in prize money between 1st and 2nd prizes in this race.
Noted at least 6 of these competitors were severely interfered with by the way that Johnny Murtagh manouvered, dashed Starspangledbanner across practically the whole field of 14 competitors blocking their run, in Murtagh's attempt to reach the far rail with Starspangledbanner. Which he succeded in doing, but at what cost to the other 13 competitors?
SECOND PRIZE £86,050 ”EQUIANO MICHAEL HILLS” trainer B W HILLS for J H ACHESON (DRAWN 10) 12/1

FORTEENTH “SERIOUS ATTITUDE JIMMY FORTUNE” trainer Rae Guest for Derek J Willis & Rae Guest (DRAWN 4) 66/1
EQUIANO (b h Acclamation-Entente Cordiale) landed the King Stand for the second time, at Royal Ascot 2010, with his customary early dash.
STARSPANGLEDBANNER (ch c Choisir-Golden Anthem) Duel Group 1 winner in Australia was having his third outing in Britain, since arriving from his native Australia. Running 4th on his debut at York in May, in June he won the Group 1 Golden Jubilee at Royal Ascot easily, with ten of these behind him.


The winner surely, due to the way that this race actually panned out to be, was won by EQUIANO, and should belong to EQUIANO as of right, because in the circumstances created by Murtagh so many of the competitors were denied a fair run.
END
Posted by Turfcall at 04:00 No comments:

Email ThisBlogThis!Share to TwitterShare to FacebookShare to Pinterest
Labels: Starspangledbanner from his native Australia 09.07.2010

As you can see we have a new website for Turfcall which not only keeps watch over the industry but also displays useful and very interesting information.

We update on Tuesdays.

Please come back soon!
Posted by Turfcall at 05:05 No comments: 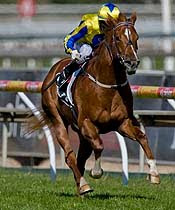